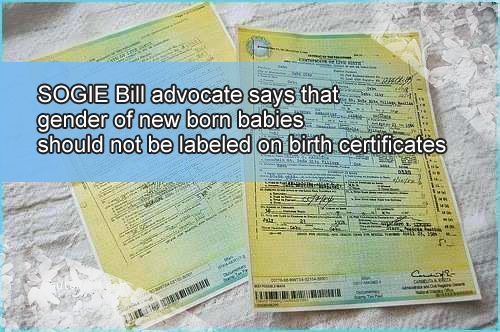 An advocate of the SOGIE Bill said that parents should not assume the gender of the newborn baby because someday they might learn that their guess may be wrong.
During the Senate Committee hearing on the said bill, Lagalab LGBT Network President Naomi Fontanos showed a presentation to the lawmakers explaining the difference between gender identity and biological characteristics.
“Example, I identify myself as a transwoman, my gender identity is female, but I’m attracted to males for now… so currently I’m exclusively heterosexual identifying,” Fontanos said.
“But I have sisters or transwomen just like me who are attracted to other women,” she added.
She mentioned the case of Angelina Mead King who kept her relationship with her wife Joey Mead who’s a female despite coming out as a trans woman.
After the presentation, Senator Nancy Binay who was very curious about the topic asked Fontanos
Binay asked the difference between her as a person born as a female who’s attracted to male and other gender identities.
“Ma’am you were born a baby and you are assigned as female at birth, but your gender identity matches your gender assignment at birth,” Fontanos told Binay.
The Senator followed it up with a question asking Fontanos if she wants to stop labeling the gender of babies in their birth certificate after they were born.
The LGBTQ+ advocate answered it by saying that as much as possible people should not assume the baby’s gender by putting Male or Female on their birth certificates.
“In our case as trans people, as a transwoman, I was assigned male at birth. It was incorrect, it was just a guess and it was a wrong guess. gender assignment is predictive, it is not final,”
Fontanos added that in some first world countries like New Zealand and Australia, the parents could now choose if they wanted to include the gender of their baby on their birth certificate.
According to her, some parents in the said countries may put “x” or “double dash” to the gender information of their baby to show that they’re not assuming the gender of their child.
The same system also applied to their passports so they could address their gender freely.
“Basta if the x or double dash is indicated, therefore they’re not male or female. So if they pass the immigration for example or having a business, then the people doing business with them have to ask ‘how would you like to be addressed, how would you like to be called?’” she said.
FacebookTweetPin