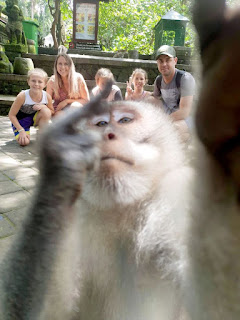 A man, from Queensland, Australia, and her family were on a recent holiday when they encountered the curious monkey at the popular Monkey Forest.
Together with her husband and children, a woman asked a local guide to capture a photo of them all at the sight of the sacred forest.
The Hicks all cozied up and smiled for the camera – then the monkey struck.
Carrying out both a photobomb AND a selfie (no mean feat), the monkey (this is the best bit) then seemingly stuck a middle finger up.
It was only when later looking through the photos that the man truly spotted all the detail – and burst out laughing.
Woman said: “We were only in Bali for a week and thought it would be fun to go on a day tour around Bali.
“As part of the tour, we went to the monkey forest. I thought it would be a fun experience.
“While we were there, a guide offered to take our photo. But as he did, a monkey suddenly came in front of the camera.
“The guide had peanuts in his hand and then began feeding him. It was really funny.
‘As I was flicking through the photos afterward, I noticed that in one of them the monkey was actually giving us the finger.
“I showed my husband and we both started laughing. We thought it was hilarious.
“The monkey definitely had a cheeky persona going on.
‘We had such a great time there and these funny photos made it even better.”
FacebookTweetPin
Entertainment